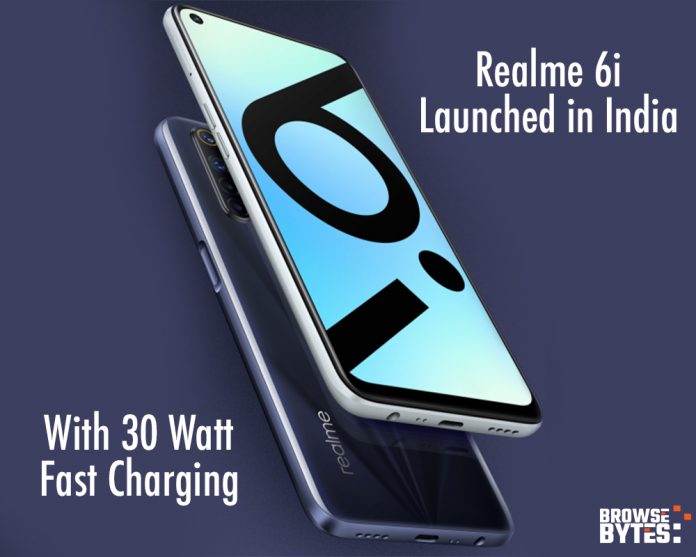 Realme 6i has finally arrived in India to give some competition to the Xiaomi Redmi Note 9 which was launched recently. The Realme 6i is a budget-oriented smartphone that comes with a quad-camera setup at the back, comes with a hole punch design, supports fast charging of 30W, and more. Realme 6i is mostly a rebranded version of the Realme 6s which was launched in Europe. Continue your reading to know more about the Realme 6i.

Speaking at the launch, Madhav Sheth, Vice President, Realme, and CEO, Realme India said, “We are excited to bring the new addition to Realme 6 series for our valuable customers in India- Realme 6i. With Realme 6i, we wanted more consumers to experience the cutting-edge features at a more affordable price and continue the legacy of Realme 6 series smartphones. The Realme 6i is an all-rounder smartphone bound to deliver the most powerful performance in the segment with MediaTek G90T and provide users an exhilarating viewing experience with its pro display of 90Hz. Thanks to our ‘Made in India’ capabilities, Realme 6i will be available not only online, but also across offline in royal club partners”.

Realme 6i comes with a 6.5 inch of full HD+ display with a refresh rate of 90Hz and a 90.5 percent screen to body ratio. The Realme 6i also features a corning gorilla glass protection. The Realme 6i is powered by the octa-core Media Tek Helio G90T processor with up to 6GB of LPDDR4x dual-channel RAM. The Realme 6i runs the operating system of android 10 with Realme UI om top. It is having a 3 card slot, 2 for Dual Sim, and 1 for MicroSD Card slot supporting up to 256GB Storage.

Realme 6i starts with a 64GB of UFS 2.1 onboard storage, which is expandable up to 256GB by using a microSD card. The Realme 6i has a battery backup of 4,300mAh. although it supports 30W fast charging, it gives only a 20W charger in the box. The dual SIM handset also features a side-mounted fingerprint scanner.

The Realme 6i supports a quad-camera setup at the back with a 48MP of the primary sensor with an f/1.8 lens. it is mated with an 8MP ultra-wide-angle lens, a 2MP of a portrait lens, and a 2MP of a macro lens. while on the front display of handset, there is a 16MP of selfie camera with an f/2.0 lens.