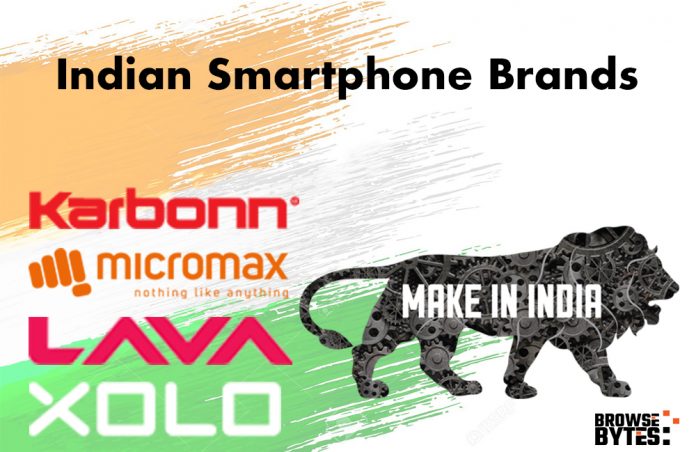 Indian smartphone brands held a massive market share of around 54% back in 2014. Among them all, Micromax enjoyed the biggest chunk of that pie. At one point, the company even managed to overtake Samsung to become the top smartphone brand in the country.

In the meantime, Chinese brands were just starting to find a foothold in the market. At that time, these companies accounted for just 10% of the market. It only took three years for the script to flip completely. By the end of 2017, Micromax was down to only 6%, while Chinese OEMs captured a little more than 40% of the market.

In 2020, companies like Xiaomi, Vivo, Oppo, and Realme account for close to 70% of the Indian market, while Indian players are all but out of the game. Due to the recent tensions between India and China on the borders of the countries, People are now moving towards using Indian mobile phones and brands that are based in India.

Many companies in India provide some stunning features and products, Check the link below

Made in India Mobile Phones

Micromax was once a leading domestic player in the mobile phone market in India. They started selling mobile phones in 2008. Mohit Sharma, Dewas, and Rohit Patel are the co-founders of the company. Some famous models of Micromax are Canvas Infinity and Infinity N11. The Gurugram-based company even became the tenth-largest smartphone company globally in the third quarter of 2014. However, it lost ground after the expansion of Chinese companies including Xiaomi in India, coupled with some inventory issues as the 4G rollout in India proceeded faster than expected by many.

“We’re working hard internally and soon we will come up with something big. Stay tuned!” Micromax tweeted in response to one of the users asking for producing an alternative to Chinese phones.

In a separate tweet, the company said that it has a new device in development with premium features, “thoroughly modern look and budget-friendly.”  Micromax is using hashtags #MadeByIndian and #MadeForIndian in its tweets to support the ongoing sentiments to boycott Chinese products.

XOLO is an Indian mobile brand by Lava International, headquartered in Noida. It manufactures personal electronics devices such as smartphones, tablets, and laptops, and accessories such as power banks. In April 2012, Xolo launched India’s first smartphone with an Intel processor, the Xolo X900. India’s largest Android phone makers. Xolo has launched Android phones and Windows Phone devices. The company has recently developed its own UI for Android phones. This is called Hive U.

Lava International Limited is a leading Mobile Handset Company in India and has expanded its operations to multiple countries across the world. Right from its inception Lava has been at the forefront of building a strong ecosystem of design and manufacturing of mobile handsets.

In line with the Govt. of India’s ‘Make in India’ initiative, Lava has taken a lead in support of this important nation-building program and has already set up a design team in India, becoming the first to do so in the country. With this ‘Design in India’ initiative, Lava is now the only Mobile handset company that makes truly “Make In India” phones with complete control on design and manufacturing within India. Lava was also ranked as the ‘Most Trustworthy Brand’ in the CMR Retail Sentiment Index 2018.