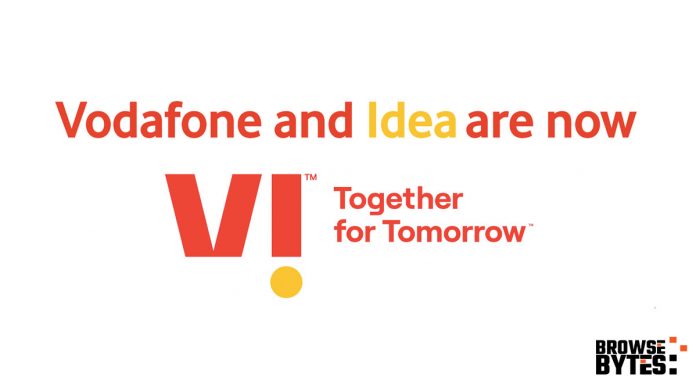 After Jio entered the Telecom industry, breaking Vodafone and Idea’s monopoly, So in August 2018 they decided to merge since then, it has reached 1 billion 4G users.

Vodafone Idea revealed its new integrated brand identity ‘Vi’ (pronounced as ‘We’), which seems to be made using the initial alphabets of both Vodafone and Idea. Shorter, Simpler, and reflects both brands in terms of color as well because the new logo uses both Yellow and Red colors. During a virtual live-streamed conference, a new brand was revealed which is designed for the new digital era. After two years of the Vodafone and Idea merger took place on August 31, 2018, and the new branding as ‘Vi‘ shows the final stage of the integration.

The new branding of ‘Vi’ has been updated on the app and website as Vodafone.in and IdeaCellular.com now redirects to myVi.in, similarly all products including SIM cards, bills, billboards, and more will get them soon too.

Ravinder Takkar, MD and CEO at Vodafone Idea Limited, said, “Vodafone Idea came together as a merged entity two years ago. We have since then focused on integrating two large networks, our people, and processes. And today I am delighted to present Vi, a brand that will bring important meaning to the lives of our customers. Indians are optimistic and want to get ahead in life. They would love a credible partner to help them on this journey. Vi’s positioning is built around this promise and will focus on meeting the customer needs to help them thrive.”

Takkar also added that Vi being the largest telecom merger in the world also starts a journey to bring “world-class digital experience” to 1 billion Indians on 4G network. 5G architecture implementation made the brand a “future-fit, digital network” for the customers.

The company started with a ‘Happy Surprises‘ program, rewarding users daily for spotting the new logo in Vi App. And, mobile users can create as well as download a customized Vi Tune using the Vi app or MyVi.in.