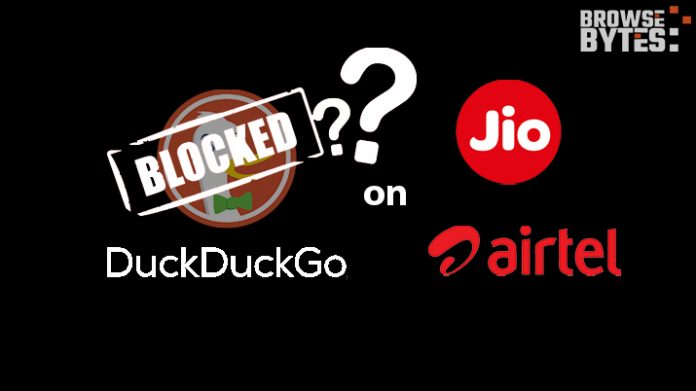 After banning the 59 Chinese apps, India may have blocked the privacy-focused DuckDuckGo web browser. Jio, Airtel, and Vodafone-Idea users are complaining about the browser on their smartphones not working.

DuckDuckGo not accessible in India to many users?

Alot of affected users took the matter to Reddit to report about the DuckDuckGo fails to load any page on Jio or Airtel networks. Maybe many Internet Service Providers are blocking the access in India.

Affected users flooded Twitter with tweets about the issues they are facing and assumed DuckDuckGo is blocked in India as per the instructions by the Department of Telecommunications (DoT). While accessing DuckDuckGo, users get a message that is, “Your requested URL has been blocked as per the directions received by the Department of Telecommunications India. Please contact the administrator for more information.”

Take a look at tweets posted by the affected users:

While affected users on social media are assuming that DuckDuckGo’s inability to work on Mobile Networks’ could be because of the DoT’s decision, which is yet not confirmed by the DoT. Meanwhile, DUckDuckGo released an official statement on the Twitter page stating they are trying to figure out the situation and the nothing is wrong from their end. DuckDuckGo has also suggested that those facing issues can use a different DNS provider to solve the issue as of now.