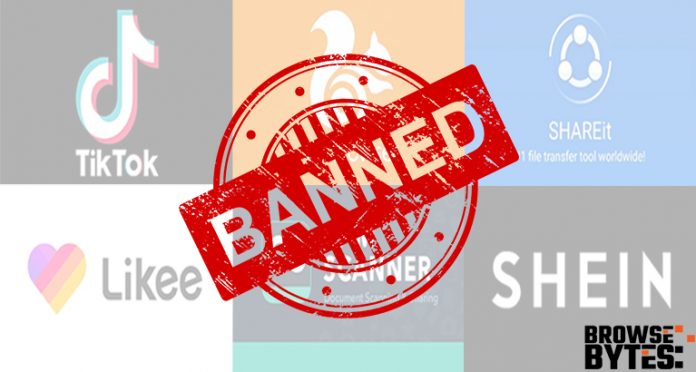 The government of India on Monday took a major decision by banning 59 Chinese made apps which include the famous TikTok App and many other popular apps like ShareIt, Helo, Shein, Likee, WeChat, UC Browser are also added to the list of the banned Chinese apps.

This decision was taken towards “safeguarding” the mobile devices and internet users of India that are crores in numbers. This move was taken to ensure the safety and sovereignty of Indian cyberspace, the Ministry of Electronics and Information Technology said in there official notification.

The ban is targeting the current stand-off along the Line of Actual Control (LAC) in Ladakh with Chinese troops which was held in the month of June on 15th-16th, at least 20 Indian soldiers were martyred in a fierce clash with the People’s Liberation Army at Galwan Valley and few more were seriously injured resulting in death.

People of India have long been demanding a ban on over 200 million Indian user app that is TikTok. However, Likee and Vigo Video are famous short video creating apps, Shein, and Club Factory an e-commerce app was looking forward to expanding their presence to compete with rivals like Myntra. WeChat is a Chinese Instant Messaging and also a social media app that competes with Facebook-owned WhatsApp. CamScanner a popular app that was already in headlines a few months back for its security flaws is also on the list. Helo is a social media platform owned by TikTok’s parent company ByteDance while ShareIt allows users to share files between any OS running device. With over 1.1 billion user downloads and 130 million monthly active users Alibaba’s UC Browser which is a mobile Internet browser that has been available in India since 2009. In the notification, the ministry said it received many complaints from various sources including several reports about the misuse of some mobile apps asking multiple system access prompts available on Android and iOS platforms which is related to serious threats like stealing and surreptitiously transmitting users data in an unauthorized manner to servers which have locations outside India and in this case China. “The compilation of these data, it’s mining, and profiling by elements hostile to national security and defense of India, which ultimately impinges upon the sovereignty and integrity of India, is a matter of very deep and immediate concern which requires emergency measures,” the ministry informed. The Indian Cyber Crime Coordination Centre, Ministry of Home Affairs also recommended blocking these malicious and security flawed apps from China. The Ministry also received many concerns from Indian citizens regarding the security of data and risk to privacy in certain apps, it said. “The Computer Emergency Response Team (CERT-IN) has also received many representations from citizens regarding the security of data and breach of privacy impacting upon public order issues. Likewise, there have been similar bipartisan concerns, flagged by various public representatives, both outside and inside the Parliament of India. There has been a strong chorus in the public space to take strict action against Apps that harm India’s sovereignty as well as the privacy of our citizens,” the ministry expressed concern.