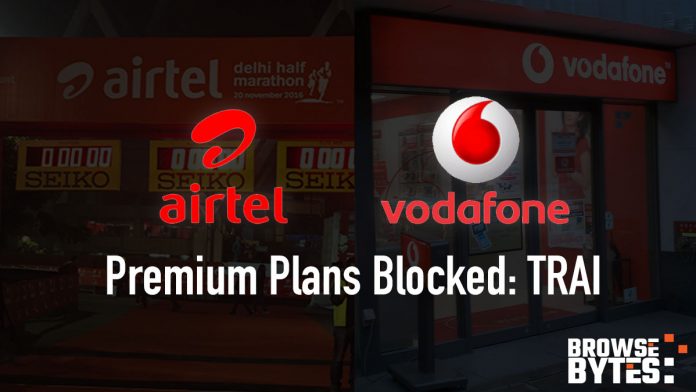 The telecom regulatory Authority of India(TRAI) has blocked the premium plans which were offered by the popular telecom operators one is Airtel and the other one is Vodafone. the plans contain platinum plans by Airtel and RedX plans by Vodaphone. want to know more? read on to know more about it.

it is recommended that the TRAI has hit up Airtel and Vodafone to put their plans on hold that offer faster speeds and services to necessary users. The decision has been taken as the plans are declared to have the norms of the services infracted. the plans in question, the services offered to people using other plans could have been affected.

An Airtel spokesperson said, “We are passionate about delivering the best network and service experience to all our customers. that’s why we have a relentless obsession to eliminate faults and have been consistently recognized by international agencies as the best network in terms of speed, latency, and video experience. at the same time, we want to keep raising the bar for our postpaid customers in terms of services and responsiveness. this is an ongoing effort at our end.”

For those who are not aware, recently a plan of Rs 499 was stated by the Airtel for its platinum users encouraging that it amounts better 4G speeds as compared to the general plans amounted to other users. RedX plans of Vodafone also declare to give up to 50% faster speeds and many more benefits that would not be enjoyed by the other users.

To respond to the questions of TRAI Airtel and Vodafone have only 7 days, subsequent to which a final decision is to be taken. for updates please stay connected.

The US may finalize the Ban over Huawei Equipments.