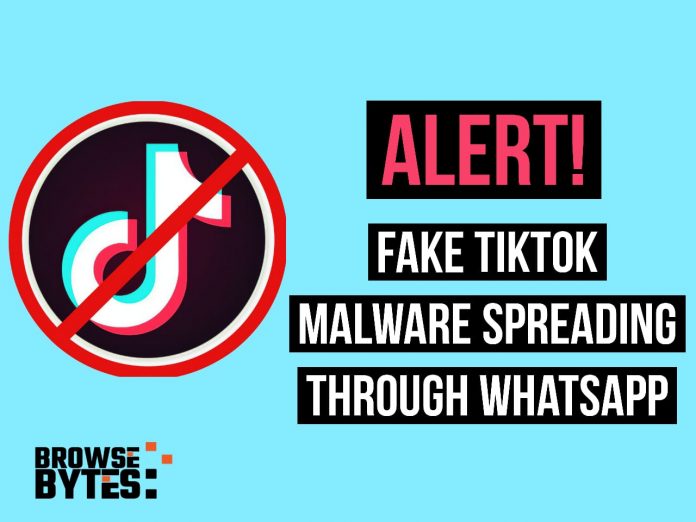 Malware is being spread on WhatsApp in the name of TikTok a short video application, Maharashtra cyber cell warns. The cyber cell said that TikTok Pro Malware was widespread on WhatsApp groups in the form of fake APK files transmitted as a means of downloading the prohibited TikTok application. It’s called TikTok Pro. Instead, the malware steals information stored on the phone of the person who opens such APK files.

The warning is important because Indian TikTok users wanted to return to the platform after the application was banned in India by the Center last month. These users are now using these shared links on WhatsApp and, as a result, leaving their phones vulnerable to malware.

The new scam follows the Indian government’s ban on 59 mobile apps with Chinese links, including TikTok, ShareIt, UC Browser, Shein, and Club Factory, among others. The scam is based on the desire of the users of these apps to return to their favorite platforms.

The Maharashtra government has issued a warning to warn people against malware that can steal sensitive user information. The TikTok Pro Malware application is an exact replica of the original TikTok application and asks users to authorize access to the camera, microphone, and image gallery, among others.

In a tweet, the Maharashtra cyber cell issued a warning that stated that while downloading and using TikTok in the country remains prohibited, cybercriminals have sent various links to social media platforms, asking users to download the prohibited application using external resources. connections.

The advisory advises users to never download APK files that mimic the TikTok app or any other popular platform that has been banned by the government. He also told users to delete these messages they receive and not forward them to anyone else. He also said that the application promoting these links was not available on Google Play and that users should be careful not to download them from external sources.

Apart from that, the so-called “TikTok Pro” application has an https:// APK link, which, according to the opinion, is not secure for any private or sensitive information. The notice added that without the https:// link, all data shared by users on the site would be accessible to cybercriminals.

93% of Indian Organisations Reported Cyberattacks in Last One Year