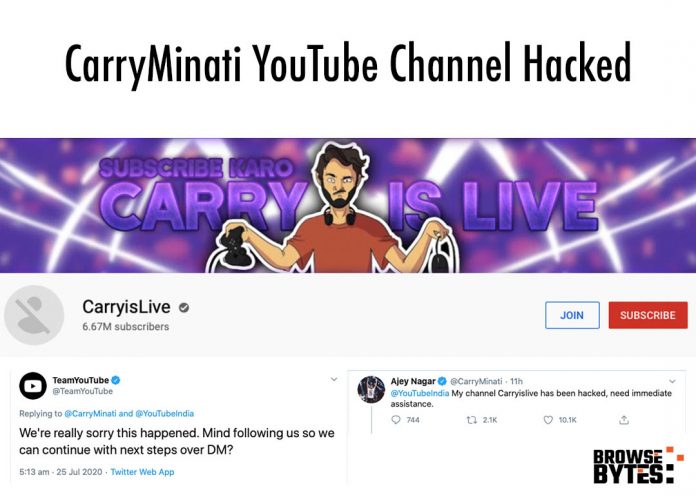 Ajey Nagar, who is popularly known as CarryMinati on YouTube, took to his official social media handle on Saturday to inform that his official handle was hacked and he immediately needed assistance to resolve this matter from YouTube India. “@YouTubeIndia My channel Carryislive has been hacked, need immediate assistance,” Nagar said in a tweet.

Hackers who hacked CarryMinati’s YouTube Channel “Carryislive” are asking for Cryptocurrency that is BitCoins.

According to a Twitter user, the hackers streamed videos asking for Bitcoin and Ethereum. The first video was titled “Ethereum Earning Call” and the second video was titled “CHARITY STREAM: HELP ASSAM & BIHAR”.

“These days hackers are hacking famous people’s social media and out of all the damage, they could do they are selling/asking or talking about Cryptocurrency. These hackers are probably thinking about long term investments,” a user posted.

Nagar fans held YouTube’s security responsible for the breach. “YouTube can be hacked so easily, I m not surprised, it’s time to say bye to YouTube,” another user commented.