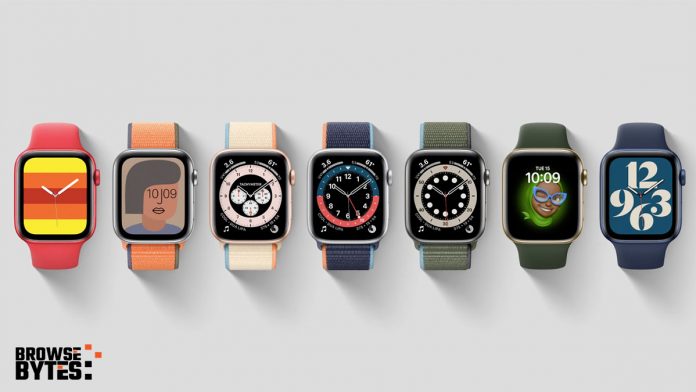 September Apple Event 2020 at the Apple Park, launched Apple Apple Watch in today’s launch. It was long rumored from Apple Tipsters that there Apple Watch will be launched with various models.

Apple Watch will come with Apple WatchOS 7 and they also stated that no Charger Adapter and no USB Cable will be provided with the Watch to reduce the carbon emission.

With Built-in Blood Oxygen Level which can be calculated in just 15 Secs and all the data will be added to the Health App and will be saved periodically even while you sleep. Apple Watch Series 6 will also study these issues Asthma, Heart Failure, Covid-19.

It comes with a new Blue and Product Red Watch, and with new Solo Loop with no buckle, Braided Loop available in different sizes.

Apple Watch now has a new feature called Family Setup which works on Apple Watch Series 4 and later with one iPhone to sync data with. And also requires the Cellular model.

With the Apple SE powered with S5 Processor in it with comes at an affordable price of $279, with all the same features available on Series 4 like Display, Health Features and etc.,

Other than this Apple Watch Series 3 continues to be sold at $199 price tag, Both the new Watches will be available from this Friday that is 18th September 2020.