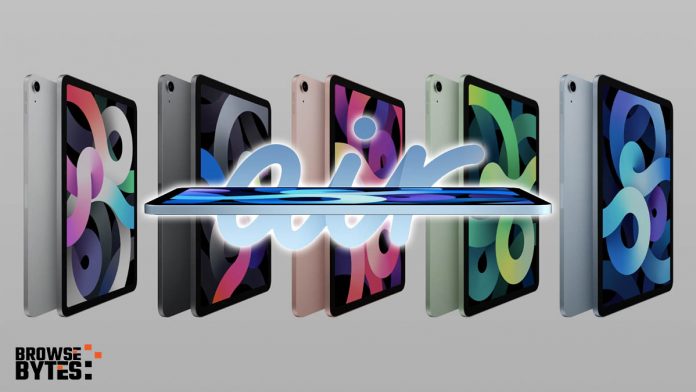 It was long rumored from the past few weeks from a lot of by Apple Tipsters but with today’s Apple Event Releases it all made clear. iPad Air and iPad 8th Gen were launched at a price point of $599 and $329 respectively.

The A12 Bionic was introduced in the iPhone X series. The iPad 8th Gen also supports Apple’s Smart Keyboard cover and Apple Pencil.

The iPad Air (2020) was announced in the Apple Event with a redesigned body having flat borders allowing to support the second-generation Apple Pencil. The new iPad Air is powered by a newer and mightier A14 Chip which a 5-nanometer chip, with a single 12MP rear camera and a 10.9-inch Liquid Retina Display having a resolution of 236- x 1640.

Apple integrated the Touch ID fingerprint sensor into the power button on the iPad Air (2020). According to Apple, the new iPad Air (2020) offers a 40% better CPU and 30% better graphics performance than the previous iPad Air (2019).

The new iPad Air 2020 comes in 3 new colors that are Rose Gold, SkyBlue, and Green with a Touch ID integrated on the top on/off button. With the latest WiFi 6 and 60% faster LTE on the new iPad Air.

The iPad Air (2020) also gets more iPad Pro features such as support for Magic Keyboard, USB-C, better camera performance, and faster LTE performance too. iPad Air (2020) price starts at $599 and will be available from next month.

SneakPeak of Apple new 5 nanometer based Chip A14 which is the most powerful chip ever made on the 5nm architecture which is having 11.8 billion transistors built inside it. new 6-core CPU and new 4-core GPU and a 16-core Neural Engine.

Apple OS UPDATES: Apple also added in the last that all the major software updates ranging from iOS 14, iPadOS 14, WatchOS 7, and tvOS 14 will be available from tomorrow that is 16th September 2020.