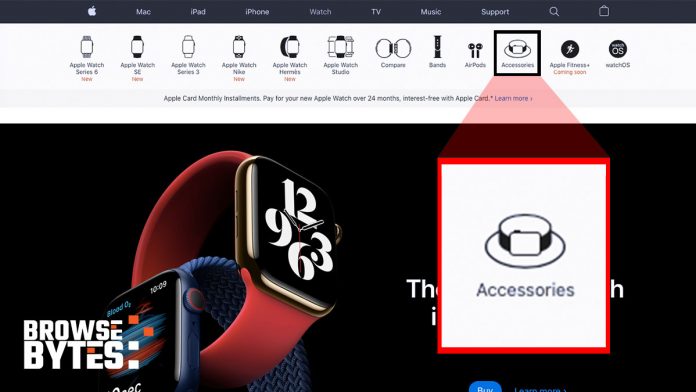 Today is the day everyone is waiting for months a lot of rumors and leaks by certain reliable leakers have been surfaced on Twitter and all over the internet.

Today is Apple’s Hi, Speed Event in the next few hours and everyone is going crazy about it and want to know about the iPhone 12 and other accessories.

AirPower is an unreleased wireless charging mat developed by Apple Inc. It was designed to charge up to three Qi devices, such as an iPhone and AirPods, and an Apple Watch simultaneously. It was announced on September 12, 2017. It’s few images were also circulated over the internet but was most probably a pre-production unit which was in testing most maybe.

But in last few hours before the launch event, this is a big thing on Apple’s Website that was captured by BrowseBytes.

When you go to the Apple’s Website and click to Watch Section from Menu Bar and Then a with new menu bar with icons appears with a tab named “Accessories” having an Apple Watch over an Oval shaped icon which seems like just like a wireless charging pad which could be AirPower, Apple’s Wireless Charging pad and was announced back in 2017.

And when you click on it, it takes you to “We’ll be Right Back, Updates are coming to the Apple Store. Check back soon.“