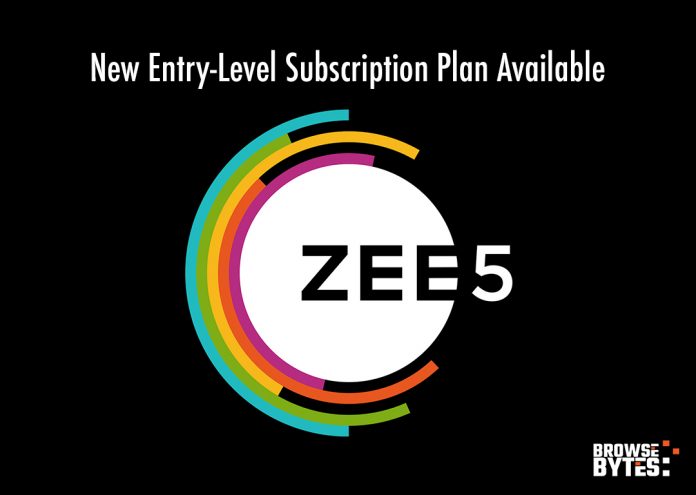 ZEE5 is an Indian video-based platform that is operated by Essel Groups via its subsidiary Zee Entertainment Enterprises. ZEE5 offers a wide range of shows and movies.

Today, ZEE5 launches a new subscription pack for Rs 365 per year called ZEE5 Club. This annual charge pack is cheapest than the existing subscription which is Rs 999 per year and Rs 99 per month. The new plan includes Select original Shows and AltBalaji shows with 1000 movies and more than 90 live Tv Channels. Also, the ZEE5 club includes Zee Zindagi shows.

The company also offers a bundle pack priced at Rs 198 per month that offers a monthly ZEE5 and Gaana+ subscription. The regional pack costs Rs 49, which allows users access to all regional content. Also, there are options available for the users who want to buy the pack paying Rs 599 half-yearly and Rs 299 for a quarter.

ZEE5 has elaborated and made this move to attract more customers with diverse user behavior, regional preferences, and viewership patterns to buy its new subscription pack which is similar to that of its rival Hotstar whose premium subscription pack is available at Rs 399 per year for one screen. Because before choosing an OTT platform most people check the subscription plans first, to know if it is in their budget or not.

As it is a move to attract customers so that customers can replace the joy of watching Television with a portable screen where users can rely upon a wide range of content like Daily soaps for the women aged between 25 to 50 and the youth who is keenly interested in watching Web series from ZEE5 or from its offerings of ALTBalaji.