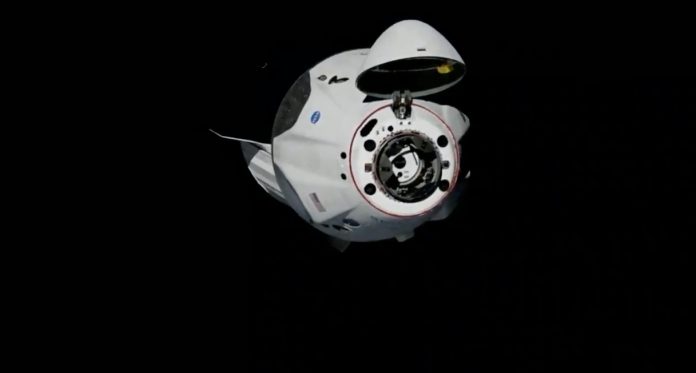 SpaceX’s Crew Dragon ‘Endeavor’ successfully docked with the International Space Station on Sunday morning. Crew Dragons are NASA astronauts Doug Hurley and Bob Behnken on spacecraft, the test pilots selected are the first-ever humans to fly on SpaceX’s Crew Dragon, and among the first to make a trip to orbit spacecraft built by a private company.

The docking process was completely handled automatically by Crew Dragon itself, which is designed by SpaceX to run on autopilot throughout the course of the entire mission including the launch.

The spacecraft is able to dock with a newer automated international docking adapter installed on the International Space Station. Whereas, the original Dragon that is the cargo version, which required manual capture by the robotic Canadarm 2 controlled by astronauts on the station.

The newly updated cargo Dragon and Crew Dragon are created to work with the new automatic system. Hurley and Behnken launched at 7:33 AM GMT on Saturday, as planned to take off from Cape Canaveral in Florida. This launch attempt was the second attempt for this mission after the weather caused a delay last Wednesday.

This mission is NASA and SpaceX’s Commercial Crew Demo-2, which is the 2nd demo mission of the complete flight and return of the SpaceX Crew Dragon spacecraft.

One of two vehicles authorized by NASA from commercial partners to give transportation serves for astronauts to and from the Space Station.

The first half of the mission is completed successfully. Till now, SpaceX has demoed that the launch process works as designed, just like the manual control, The astronauts took over and ran two tests of that system, and automated docking.

Hurley & Behnken will perform regular International Space Station crew activities, which involves experiments and research, during the next few weeks before they come back to Crew Dragon for the final part of Demo-2 that is the trip back to Earth.

Asteroid 2020 QL2, Bigger Than a Football Field, to Fly by Earth on September 14