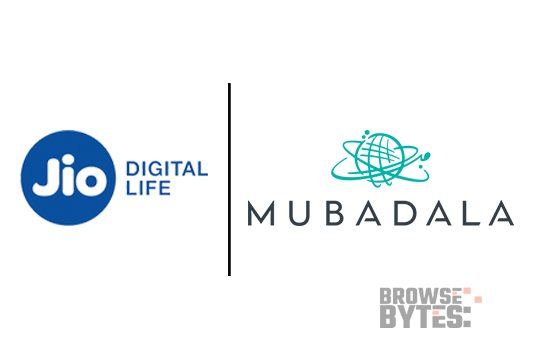 Abu Dhabi based firm Mubadala has become the latest investor in Reliance Jio Platforms of Mukesh Ambani, joining 5 firms from America which includes Silver Lake and Facebook having stakes in India’s biggest telecom operator company at the height of a once-in-a-century global pandemic.

A subdivision of Reliance Industries, which is the most valued firm in India whose main businesses are in oil refining and petrochemicals, Reliance Jio Platforms has upraised $11.5 billion in the last 7 weeks.

“Through my longstanding ties with Abu Dhabi, I have personally seen the impact of Mubadala’s work in diversifying and globally connecting the UAE’s knowledge-based economy. We look forward to benefitting from Mubadala’s experience and insights from supporting growth journeys across the world,” Mukesh Ambani, the Chairman and MD of Reliance Industries, said in a statement.

The statement today further shows the interest of Jio Platforms to non-native investors that wants a piece of the world’s second-largest internet market. Reports from Media have also claimed in recent weeks that Amazon is looking to buy stakes in Bharti Airtel worth at least $2 billion, while Google has held talks for an alike deal in Vodafone Idea, which are India’s second-largest and third-largest telecom company respectively.

India has come up as one of the biggest challenges for Chinese Tech Firms and Silicon Valley that are trying to win 1.3 billion people of the nation, out of which mostly doesn’t even have a smartphone or even an internet connection.

Khaldoon Al Mubarak, MD, and GCE of Mubadala Investment Company, said, “We have seen how Jio has already transformed communications and connectivity in India, and as an investor and partner, we are committed to supporting India’s digital growth journey. With Jio’s network of investors and partners, we believe that the platform company will further the development of the digital economy.”

Mubadala, a firm having more than $229 billion in assets, is also an investor in big brands like AMD and Alphabet’s Waymo, and SoftBank.

The new funds should help Mukesh Ambani, further set his commitment to investors when he guaranteed to cut Reliance’s net debt of about $21 billion to Zero by early 2021, partially as a result of the investments it has made to build Reliance Jio Platforms, said Mahesh Uppal, Director of Com First which is a communications consultancy.

Its core business that are oil refining and petrochemicals which have been hit really badly because of the pandemic that is coronavirus outbreak. Its net profit in the first quarter of 2020 that ended on March 31 fell by 37%.

Jio Glass: All You Need To Know.