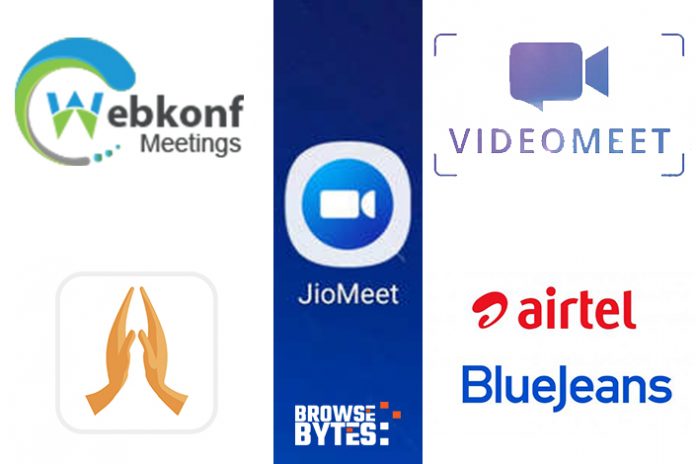 Video calling has never got the importance in the way now it is getting. because of a lack of going out and meeting people personally, thanks to the ongoing coronavirus pandemic. we all are admitting our chosen video calling portals to stay connected with our loved ones and the control has extremely seen an upsurge.

The demand to use a video calling app has faced with the need to proceed with an Indian app inspired by ‘Atmanirbhar Bharat ‘ vision mainly. keeping this in mind, we have a bunch of Indian video calling apps and even the portals you can acknowledge if you are in favor of this vision and are afraid of using other popular apps such as zoom, google meet, Microsoft Teams, and many more.

JioMeet is one of the most popular video calling apps recently in India that comes from the Jio field. in terms of looks and easy way of usability with zoom, the JioMeet app competes with it. this app is not confusing for the users as it is easy to download for android as well as iOS users. jiomeet app is suitable for making HD audio and video calls. it allows for up to 100 people in a single session. this app is safe and has no call duration limit.

Say Namaste is another Indian video calling app that has recently been launched. It is developed by Inscripts and is available on both android and iOS. it is also available in the website version. this app helps the users to make both video and audio calls and can add up to 50 people per call. The Say Namaste app upholds multiple features like screen sharing, media chat and messaging, and grants easy file sharing like documents, PDFs, presentations, images, video files, and many more.

VideoMeet is an app that also had taken place in the list of most popular Indian video calling apps for us. it is made by an IT firm which is based on Rajasthan, called by Data Ingenious Global Ltd. it also includes number of features like recording, screen share, music share, flips cameras, celebrates, chats during a video call and many more. It’s a free app and comes with the data compression technology so that users can use the apps with low data consumption.

FLOOR is a video calling app made by an Indian company called 10Times. the app helps users to do video calling but this app is mainly for large webinars and interactions, for example, live events such as buyers and sellers meetings, seminars, conferences, meetups, etc. while the floor is not available in-app version but can be accessed through Indian apps 10 times available on both the google and apple store.

It’s also a video calling app that supports the initiative of PM Narendra Modi called ‘Vocal For Local ‘, it grants both audio and video calls and is a part of the initiative ‘Made In India’ which is started by the Indian government. The utmost security of the users is ensured by this app. it also ensures not to share personal information of an individual with third parties.

Airtel’s BlueJeans will head-on against the other video conferencing apps such as Zoom, Google Meet, Microsoft Teams, JioMeet, and many more. the apps like these are now more flourishing just because of doing work from home which is currently in the role because of the pandemic going on, students are also studying from their homes. nearly every person is making use of such apps.