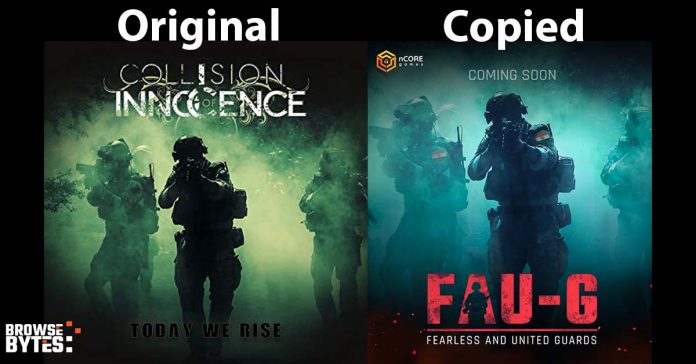 With the launch of the FAU-G poster on the Twitter account of Bollywood Actor Akshay Kumar, The #FAUG is trending now and facing praises as well as criticism by some. Even though developers mentioned donating 20% of revenue to the Indian government’s fund-raising Bharat Ke Veer initiative. But it won’t change the fact of a stolen poster.

Twitter users are flooding twitter with tweets saying that the game poster was released in a hurry ended up in a stolen poster. According to a user on twitter, the poster is from a AAA game name Collision Innocence.

Though the rumors are not true, this is a cover image of a Today We Rise by Collision of Innocence which is a United States-based band and the song is available of Amazon Prime Music.

So technically speaking the poster seems to be stolen from the band, which is really disappointing as this could be a potentially big thing replacing PUBG mobile in the future (as it may never return though in India because of the Chinese Apps Ban) but still, this doesn’t seem like a good start to it. Due to which it is facing a lot of criticism on Social Media.

There is new speculation going on twitter after this came up that is the poster copied or not. Twitter along with other social media platforms few other images are being circulated stating that the cover image of song Today We Rise by Collision of Innocence has taken inspiration from the cover of the movie URI which was released last year in 2019 based on a terrorist attack in district URI, Kashmir, India.