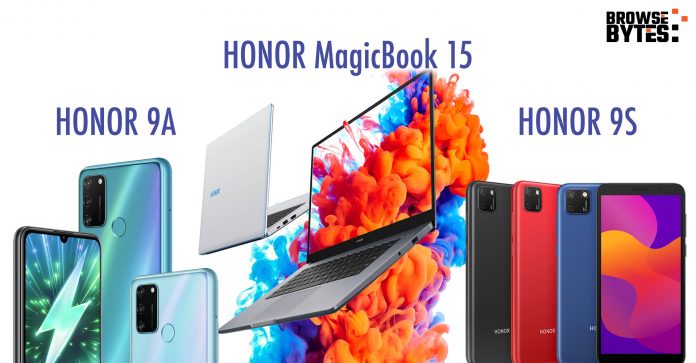 Both Honor 9A and Honor 9S are the company’s new affordable devices with long battery life, the smartphones will use Huawei’s app gallery instead of Playstore and MagicBook 15 to be the first laptop with which the company is entering into markets in the country.

It will come with a 6.3 inch HD Display, with 3GB of RAM and 64GB storage along with a micro SD card which supports up to 512 GB, powered by octa-core MediaTek Helio P22 SoC, equipped with 5000mAH battery and a fingerprint sensor at the back. The camera is set up with 13 mega-pixel+ 5 megapixel super-wide-angle, 2-megapixel tertiary sensor, and an 8-megapixel selfie camera for HD photos. Available in two color variants i.e phantom blue and midnight black.

It will come with a 5.45 inch HD Display, with 2GB of RAM and 32 GB storage along with a micro SD card which also supports 512 GB, powered by octa-core MediaTek Helio P22 SoC, equipped with 3020 mAH battery and a TUV certified eye comfort mode that helps in reducing eye stress. The cameras are set up with a 5-megapixel front camera and a 8-megapixel rear camera with flash. Available in two color variants i.e black and blue color.

It will come with a 15.6-inch full-screen display, weighs 1.53 kg and 16.9 mm thick, powered with an AMD Radeon Graphics 5 3500U CPU, being sold in 256GB or 512GB PCIe SSD storage options. The book comes with a 65W USB type C charger with two Full-sized USB Type-A Ports. It comes with a pop-up webcam and includes an S-shaped fan design for heat dissipation and runs on the Windows 10 operating system.