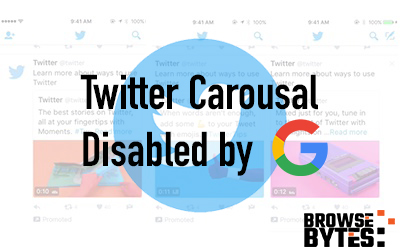 Lately, twitter faced one of its biggest hacks ever. The accounts of celebrities, companies as well as politicians were overblown due to the hack. Using this hack, the hackers tweeted from accounts of Apple, Jeff Bezos, Uber, Elon Musk, among others asking for Bitcoins. Soon after the fiasco, Google removed Twitter Carousal from the Search results.

Earlier, when we search for any celebrity or a company on Google it was used to come in the boxes of Twitter showing their latest tweets. Even determined search keywords conducted some of the relevant twitter accounts on top. After the fiasco, Google has intentionally turned off the feature. Although, the change is not permanent and Google may authorize this feature back very soon.

Android Police reached out to Google for a comment on the same, and here’s what the Search Engine giant had to say – “We can confirm we have temporarily removed the Twitter carousel from Search following Twitter’s security issues. Before restoring the feature we will carry out a careful review.”

SEO consultant of Australia named Brodie Clark noticed it very first. Later, Google confirmed that this change has been made but it will be back soon. Now, the users will not be able to observe the Twitter carousel and sooner get standard search results from the social media platform.

In case if you missed the news, the accounts of high-profile people were hacked. Hackers used the trust of these people as a tool to earn some quick money. They made tweets about encouraging the doubling of money for people if they sent money on the given Bitcoin address. Hackers came up receiving over 90 lakhs with this scam.