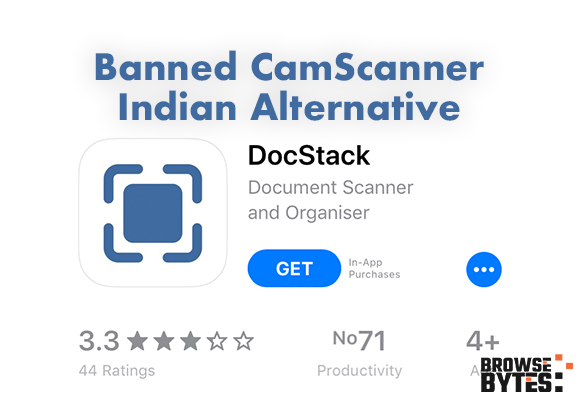 DocStack a new app that is made by IIT Delhi students has been floated in India as a replacement of the banned app CamScanner due to security issues being a Chinese app. This app is included in the list of the 59 Chinese apps which is recently banned by the Government of India. Moreover, this app came with a substitute, as they can sustain in the market which is being revolutionized with the aim of making India Atmanirbhar Bharat.

DocStack is a new app which provides an ease in scanning and assembling the documents naming bills, medical records, visiting cards or any personal document, etc., as it’s mentioned that  “It’s being capable not only to take pro-quality scans on the go, as well as it will provide universal search feature which will let the users find documents easily when they need them the most. Also, it provides the users with certain features so that they can use several saving options such as scanning, taking a photo, or directly taking pictures from the device’s gallery.

The DocStack app is presently launched for iPhone Operating System (iOS) and it can be downloaded from the app store as it provides the storage capability of 30 documents only if the free version is being used. And if users want to enjoy unlimited documents storage and additional security layer of Touch ID or Face ID for document safety then the app is made available with a premium subscription for the users who wish to use the paid version and enjoy benefits.

ELYMENTS APP: It is still in its nascent stages and has a long way to GO.