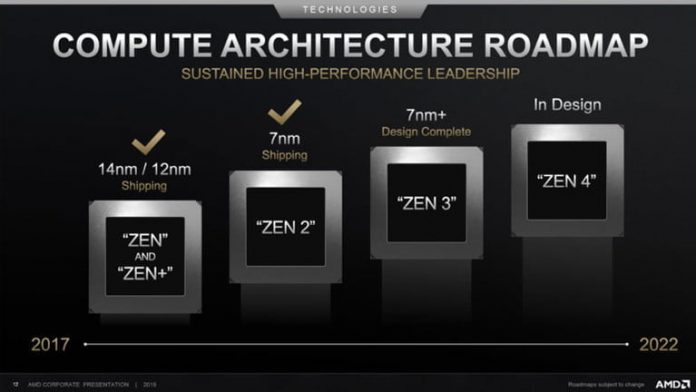 Ryzen 4000 based on a 7nm+ manufacturing process, which will potentially push clock speeds high enough to really make competitors (Intel) cry, especially if forever loved intel team stays stuck at 14nm on desktop. AMD also confirmed that these processors will officially support X570 and B550 motherboards. Rather than pushing its Ryzen 4000 lineup to compete with the top-end Comet Lake chips, AMD launched updated Ryzen 3000 series processors.

A full range of chips was announced, from the low-end to the high, and they will begin showing up in laptops in the coming months from a range of manufacturers, with two of the first cited models being the  Asus Zephyrus G14 & Lenovo Yoga Slim 7. The Yoga Slim 7 will launch with a 14-inch display at a price of $850 with an 8 cores Ryzen 7 4800U processor in a 1 KG form factor designed to compete against ultrabooks powered by Intel’s processors.

Mobile gamers will be attracted towards AMD’s flagship Ryzen 4000 mobile processors, which includes the Ryzen 9 4900H and 4900HS CPUs. Both chips are designed to target and compete with Intel‘s Core i9 silicon in the high-end mobile gaming space.

Desktop Ryzen 4000 CPUs with Zen 3 architecture will likely arrive later in the year of 2020. Recent rumors posted by Wccftech suggest that these processors will be available by as early as October, but an announcement could be made earlier, in the August or September time frame. More recently, Tom’s Hardware reported that DigiTime’s sources at motherboard makers had indicated that the desktop Ryzen 4000 CPUs could arrive at the Computex trade show which has now been canceled due to COVID-19 and after having initially been pushed back to fall from its traditional late spring date.

AMD, like many of its tech peers, could switch to an online-only format and host a livestreaming event to unveil its processors.

With success of chips like the Ryzen 9 3900X and 3950X, we expect AMD to follow suit with the Ryzen 4000 lineup. We expect the pricing to stay roughly the same for the next generation.

Right now we know these will be the first 7nm processors to make their way to laptops, and with that they bring some huge benefits.

Now even with ultraportable laptops, which were previously limited to 4 core/8 thread configs, but now you’re getting 8 cores and 16 threads.

This is a huge improvement, and even though clock speeds are limited to 4.2GHz – or a bit higher with 25W configs, users should experience massive gains in productivity workloads.

However, Every other SKU has hyper-threading. For ex, AMD Ryzen 7 4700U has 8c|8t, whereas the 4800U has 8c|16t. Both Mobile H-Series chips have hyper-threading however, along with higher base clock speeds.

AMD Ryzen 4000 series for laptops will come with integrated graphics performance. AMD is promising a boost of up to 28% over Intel’s Ice Lake when it comes to graphics performance. These chips will not be in gaming laptops, however, but when you just want to get in a quick match on your free time, which will make a major difference.

We listed the core specs of each of the laptop processors.

Benchmarks for a desktop-based variant have come up online recently, but that chip is a Zen 2-based Renoir APU. So, it won’t deliver the same level of performance as the high-end SKUs.

Rumours suggest that it will be based on TSMC’s new 7nm EUV Process, which is also rumoured to be seen with Nvidia Ampere. It could lead to much more power efficient chips, which could see clock speeds see a sizeable bump – which could seriously threaten Intel’s Gaming chips.

Another thing that could hurt Intel is the rumour that with Ryzen 4000, AMD may introduce more powerful hyper-threading, with each physical core having 4 simultaneous processing threads, as opposed to the two found on today’s silicon chip processors. We’d definitely take this rumour with a grain of salt, but just incase it’s true it could even further widen the gap between AMD and Intel when it comes to multi-threaded workloads.

Inter-generational support of the same AM4 socket which is one of the best features of AMD’s Ryzen CPU’s. Even First-generation Ryzen CPUs and motherboards, have been able to upgrade their processors without the need to buy a new motherboard, Just a BIOS Update would do. That will be the case with Zen 3 Ryzen 4000 processors too, with this being the last generation of Ryzen chips to use the AM4 socket.

A recent leak of AMD’s X670 chipset showed that Zen 3 will support AM4 socket. The X670 chipset is expected to arrive in the fourth quarter of 2020 and with PCIe Gen 4.0 support and increased I/O from additional M.2, SATA, USB 3.2 ports.

But Wccftech reported that native Thunderbolt 3 support may still not happen on this chipset. AMD also recently announced a budget-friendly B550 chipset that supports the AM4 socket and brings PCIe 4.0 support to a lower price point.

Ryzen 5000, expected in 2021, will move beyond AM4 to a new AM5 socket design that’s rumored to be built around technologies such as DDR5 memory and PCIe 5.0, according to Wccftech.

In start of 2020, stock of Threadripper 3000 CPUs is only just starting to match the demand, so details about Ryzen 4000 Threadripper CPUs are almost non-existent. We will have to wait and see what fourth-generation Ryzen Epyc server CPUs are like before we can guess at the capabilities of Threadripper 4000 CPUs.

Like Threadripper 2000, however, we would expect a more modest improvement in single-threaded performance, though whether we’ll see a similarly dramatic increase in core counts remains to be seen.