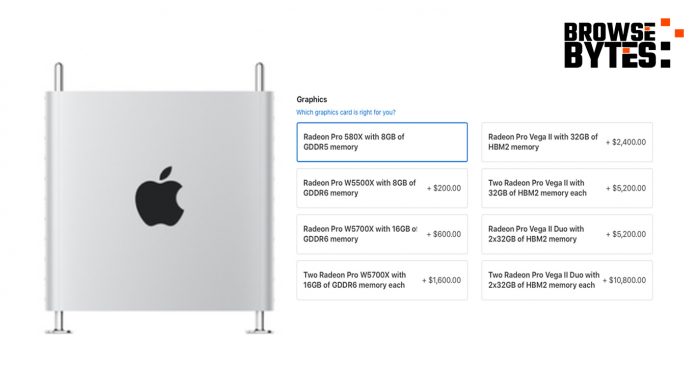 If you want to upgrade your existing Apple Mac Pro or want to add some heavy duty GPU to your new order then Apple just added Radeon Pro W5500X GPU as an option.

If added at the time of purchase then adding $200 to the purchase price which is still an expensive Mac Pro.

If you’re already watching one among those under your desk, the MPX Module-housed GPU will set you back $600.

It’s not cheap in price, but after all, it’s an upgrade over the stock GPU. As well it should be.

An AMD’s RDNA architecture based 8GB GDDR6 Radeon Pro W5500X, featuring up to 5.6 teraflops of single-precision performance or 11.2 teraflops of half-precision computing. Supporting up to one 5K display, four 4K displays, or one Pro Display XDR. The half-height MPX Module design fits in an MPX bay and allowing PCIe slot 2 for additional expansion.

Right after Apple started offering the $1,000 W5700X MPZ Module very recently, with this new card option it is sitting in between it and the base option.

If you require heavy duty GPU power but a $100 option doesn’t work for you, then this is the best option for you. It also comes with 2 HDMI ports and one more than the more costly W5700X variant. But still, it doesn’t have the 4 Thunderbolt 3 ports of the more expensive card, it needs to be said.